So Thursday Joe crossed the finish line at the Disneyland Esplanade. 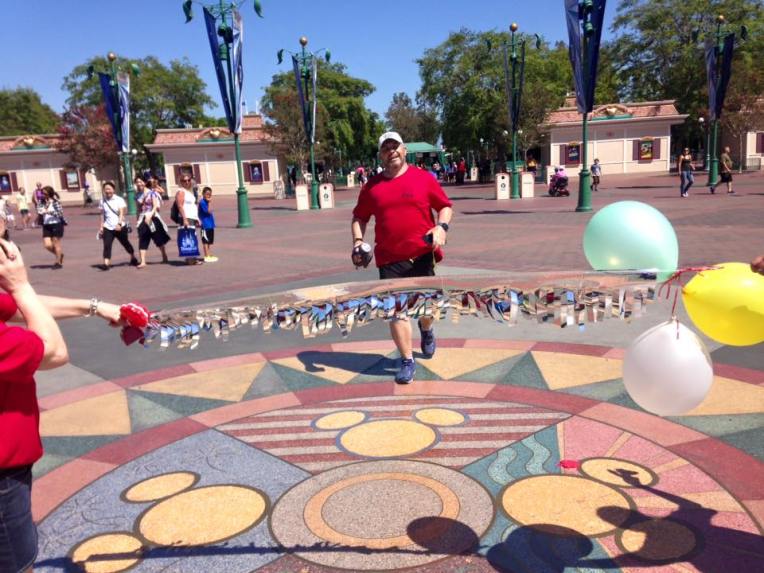 It was pretty emotional for most of us. Not everyone understands what exactly happened or how incredibly difficult it was for him. Over $11 000.00 was raised and more donations keep coming in so a final tally hasn’t been completed yet.

We had big plans for all the DAWS team to be there, hang out and have a fantastic time. Fatigue and post event stress disorder took over and made the weekend less epic than expected, but lovely just the same.

I cannot express how in awe I am of this man. 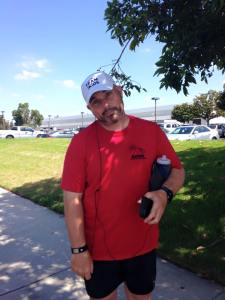 I am guessing he lost around 20lbs and his muscles became more defined.

I am currently retracing the steps he ran, while driving home from LA. Lets recap: I drove to Monterey today. and it took 10 hours in my CAR, and I speed. Joe ran everyday without complaint and it took him 17 days…on foot. IT IS FREAKIN FAR PEOPLE!

I cried a lot these past few days. I knew I would be feeling post event stress and let down. It is better and worse than expected.

Better because it was a ton of work and I am exhausted, I am happy to not be doing it.

Worse because I didn’t anticipate how much I would miss him.

He is my pal. He apparently is also my right arm and it feels like its missing. It’s in New York tonight so I am typing this one handed. Not easy for me.

Also worse because we had an epic crew of 2, his daughter and my daughter. They are also great pals. A piece of my heart flew to Florida yesterday and the rest of my heart flew to Edmonton today. So here is me, homesick like crazy, still sleeping in a hotel, without my heart and right arm.

There is also the factor of the missing half of me who was my stress support. She also left for New York yesterday. She was my medical back up and sounding board. She calmed me down when I was hysterical and when I cried for no reason. I miss her like a sister. I am a disaster.

Post event fun came and went with unmet expectations and experiences that were unexpected. I think I was too tired for Disneyland to enjoy it properly. Effects of being in the car endlessly enhanced some of my symptoms that I live with and caused me to miss my races. I am a disaster in the truest form.

I miss things I never expected to and hate things I also didn’t expect to. I have the marathon blues in the worst way.

But wait: I just had a life altering experience. I learned things I never would have without this. I know myself better. I gained personal and professional experience on a level I had never fathomed. I learned that not everyone is good at keeping secrets and now I know who I can share with and who has my back. I learned that supporting your friend in achieving his goal is likely one of the most rewarding experiences I will will ever have. There were very few of us involved in this. Some were on the phone and some were in the car. Their  worth and contribution was as valuable as the next. I got to know people I never met before and had a chance to experience their perspective. I became part of a larger family. I also felt more alone that humanly possible.

My daughter said it best, you think you know what is going on and then you actually live it. Two completely different things. Amen sister.

Tonight I feel alone. Everyone is tucked up in their beds at home and I am frying in a Super 8…ITS SO HoT!

I miss my team and my right arm.

We did great team because tonight, plans are in place to change lives all because a boy from the Bronx decided to run 500 miles so people do not have to go through what he and his mom went through when his 2 baby brothers dies in infancy.

Here is to Jonathan and Robert, two young boys who lived a very short time but made a giant impact on those around them so their brother could do great things in their name.

In the words of Rob Thomas when he sang Santana’s Smooth….It’s a hot one

It started out grey and cloudy, perfect running temperatures north of Santa Cruz, we ended close to Monterrey in the blistering sun.

Joe bounded into my room this morning for breakfast like a puppy – all full of energy and excited. This was a welcome change from his nervousness and concern of the past 2 days. He FELT great. He looked strong and ready to roll. Me, however, I felt like crap. I need to figure out how to worry less so I can relax more. The last thing I want is for Joe to fall or get hit by a vehicle, so I am constantly driving a head checking the route, making sure things are good. Then I race back, feed and water him, race ahead and get groceries/gas/Starbucks…that’s right, I am not camping, I need my coffee.

Today was interesting, people are beginning to ask about the sign on my car and about Joe’s Epic Run. One lady flagged me down at the street light in Aptos to ask what SMA was. Clearly we are raising awareness, Goal 1 met! People are donating money too, Goal 2 met! We are finished day 3 and I am calling this successful already. Now to get him to the finish line in one healthy piece and I will be satisfied.

I mentioned yesterday about our arguments. They go EXACTLY like this:

Joe: No I am good

I win because he knows he needs to keep his energy stores up. It aids in recovery and in the amount of distance he is able to do. So far, so good. I watch for signs of cramping, brain fog, dehydration – we have just encountered Brain Fog – fig newtons fix that. It means he needs sugar. Salt levels are good and I took his pulse today – all good. He gets really hot so I a have cloths soaking in the ice bucket for the back of his neck and forehead, ice packs ready for his legs and and ice to fill his water bottle with to lower his core temperature. I think this helps, at the very least he feels supported and I think that is half the battle, knowing he isn’t alone in this and there is someone who has his back.

We were in farm country today. Workers bent over in the fields endlessly. I appreciate my food more today than I did yesterday.

I found Fleet Feet today. As a gal from the Running Room, I had to explore! Shoe prices are only about $20 less than in Canada and with the exchange, I’d be paying WAY MORE. But those gals knew their stuff! I was listening to the gal in the shoe pit  – I’d hire her. After their customer left, we talked about differences in the stores. They carry more weird socks and feet things, not as much accessories and less shoes. But if I lived in Santa Cruz – I would shop there because those gals know their stuff.

I texted Joe to see if he needed any gear – we are good. He may need new shoes before the month is up but he brought 3 pairs, so we will see. Everything else is good. We are well supplied. We just need more shade.

We shall see what tomorrow brings.

Please consider donating to help us find a cure to stop the #1 genetic killer of children under the age of 2. Joe’s lost two brothers to SMA and we think no one should have to watch their children die. 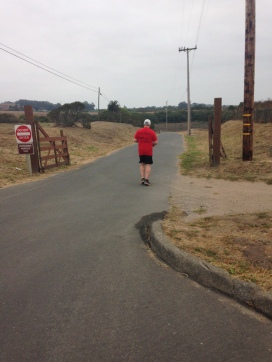 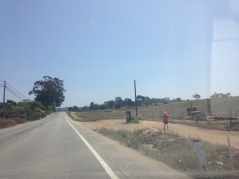 Hills were easy compared to today.

We started out at Devil’s Slide, it is the old HWY 1 but erosion and unsafe driving conditions had the State build a tunnel through the mountain. They developed Devil’s Slide as a pedestrian only trail. It was the only way for Joe to complete that leg of the trip.

I dropped him off on the north side of the parking lot, wished him well and I drove through the tunnel that brought me out on the other side. I parked on the far south of the parking lot, sat on a rock and waited. Dawn on the ocean is a pretty amazing time. It was quiet – for California, there were pelicans, gulls and whales. I could have sat there all day, and I wish I had.

I waited for Joe to arrive and he raved about his views as well. To say the Pacific Coast of California is anything but spectacular would be a lie. It is simply stunning.

Drought is causing real issues here on the coast. Trail erosion has closed down trails that we had hoped to utilize. finding safe spots on the road to continue has been tricky. We cross the highway to access roads and trails, and when they end, we cut back in search of other roads and trails. We were able to find access to the coastal trail that lead over 17 miles. But it ended with a locked bridge. The plan was to go around, but the trail on the other side was closed too. Drought conditions are so severe, they need to preserve the trails so they don’t fall into the ocean.

23.2 today when we had hoped for 35 miles. It just became so laborious to find suitable road.

The good news is, tomorrow the shoulders are wide enough to run on the highway. We decided the safest way would be to run facing traffic. That way he can see what is coming.

It is also straight – which is important because it is exhausting chasing him to head into the correct direction. With all the changes, it has been a challenge to keep to the right path.

We are so close to Santa Cruz, I am sure he will run through part of it tomorrow.

I have to say, if you ever decide to give this a try, do it with your pal. We are having the best time and laugh most of the time and fight the rest. But if you know us – it is expected. That is our thing. I can argue and fight with Joe the way I argue and fight with my brother Mike. It is a thing of beauty. Arguments of EPIC proportions. That is part of the fun.

Joe hasn’t slept in days but I think he will finally sleep tonight. Which is good, because I am planning a 35 mile day tomorrow. 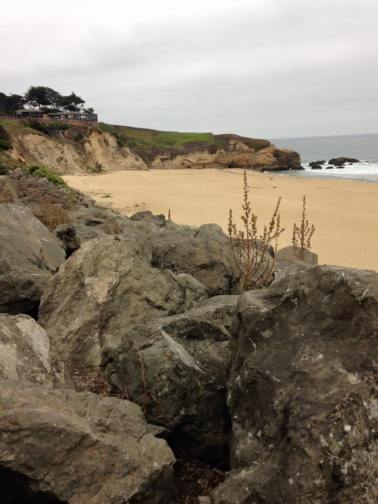 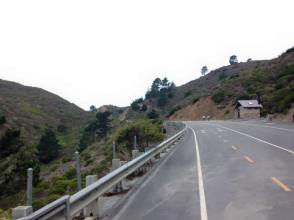 The sea wall
I love public art. It elevates cities even if you think it’s terrible. Art’s purpose is to make you feel. If you hate it- that’s still a feeling or emotion.
The infamous dude at Dude Chilling Park
I love lighthouses. In another life I think I must have lived in one.
One of my favourite places to be in the city.
Happy #nationaldogday to this doggo. Captain is my heart ♥️
I love these guys
Swimmers, rowing club, paddle boards, kayaks and canoes on the river today.