My Papa Bear is 19 years older than me and he just had his 70th birthday. It was one of those moments where I realized I think of him as the young guy sitting beside me on Main Street in Disneyland waiting for the Electrical Light Parade. I was six so that would make him twenty five. I think of dad with dark brown hair, tall, fun, able to leap tall buildings in a single bound. I then see my dad and realize he is 70. it always knocks the air out of me.

My mom appreciates finer cuisine, so its fun to take her to high-end brunch places. We went to Café Linnea for her birthday. My dad however, loves a really great diner. Old school diners that are decked out in vintage items. I had heard great things about Rockin Robyn’s Diner and knew the wait could be long to eat there. If we went early, I didn’t think it would be too bad. I put it on my 18 in ’18 for two reasons:

We arrived at 9 (not early but whatever…) to a line up at the door. There were 4 parties ahead of us. We were given a pager and decided to wait outside. 20 minutes later, it was out turn.

We were seated at a table beside the large mural and Dad noted, “I have never been to a drive-in that had any of those fancy muscle cars. Never. Where did people think young guys got the money for something like that?” Good point dad. But the art on the walls was interesting. There was a juke box at the other end of the diner and it was playing 80’s rock. This reminded my daughter of a great story about The Salt and Pepper Diner. Give it a listen, I promise you won’t be disappointed. It’s hilarious.

We looked over at the lunch counter and surmised they make a great milkshake because of the equipment sitting there. The decor was fun too, black and white checked tiles, Alice in Wonderland items, retro ceiling fans and red booths!

We ordered coffee and checked out the menu, coffee was straight up and good, this isn’t a latte and cappuccino kind of place. The waitress was sassy and hilarious. I am pretty sure she is my spirit animal, or at the very least me in a parallel life. I asked her to marry me after some fantastic zingers she through at my dad. She was his kind of waitress too. Fun, efficient and the right amount of sass you expect at a diner.

There were five of us and we ordered Eggs Benedict, a stack of pancakes with eggs and sausage, waffles , and mom can’t be easy and order a menu item so she went with 3 sides. We waited ten minutes at most before massive portions arrived before us. 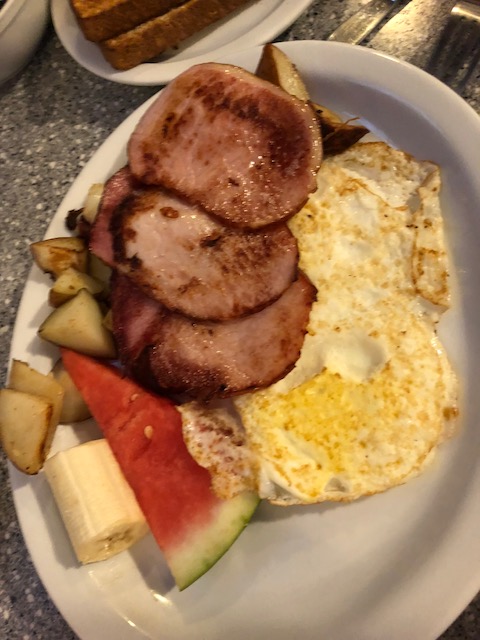 Every dish came with fresh fruit and eggs were made to order. The food was delicious and I immediately understood why this place was so popular. My dad raved about this place and loved every minute of it. Excellent  value all around!

After breakfast we went to the counter to pay and were given tiny little candies that said “Eat Me”. I was over the moon with the Alice in Wonderland reference. We were told there is a Alice in Wonderland Mother’s Day Tea Party that happens every year too. Mom and I will have to remember to check that out next year.

Now I think I want to give lunch a try or maybe a milkshake. If you haven’t been before, I recommend it. I think it’s the best diner fare in the city. 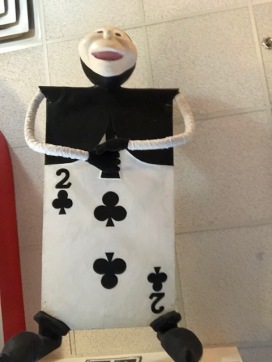