When my daughter was 15, she visited Paris for the second time in her life. It was experienced by her best friends from, all of whom were in French Class. Their guide recommended they visit Ladurée because it was known for making the best macarons in the world. Up until that moment, she had never had one. After tasting one, she knew it was the best thing she had ever tasted and had always searched for a similar experience here in Canada. She brought home a small box and would not let any of us try it. They were hers. She has since learned, macarons need to be eaten fresh, the same day they are made or they lose their delightful texture and taste.

I have raised a macaron connoisseur purely by accident.

For her birthday adventure, we wanted to try different macarons available at bakeries or pâtisseries in Edmonton. We were curious to know who had the best ones. We decided on 3 different places.

We began our day in west Edmonton at Bon Ton and worked our way east.

We had to take a number. I like this, you can then browse and not have to queue up. 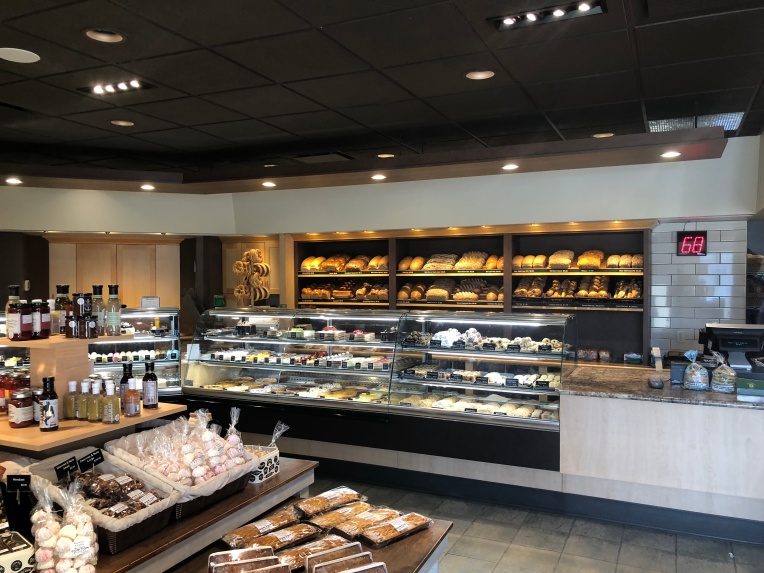 It was busier than it looked, I just waited a long while for an empty shot. 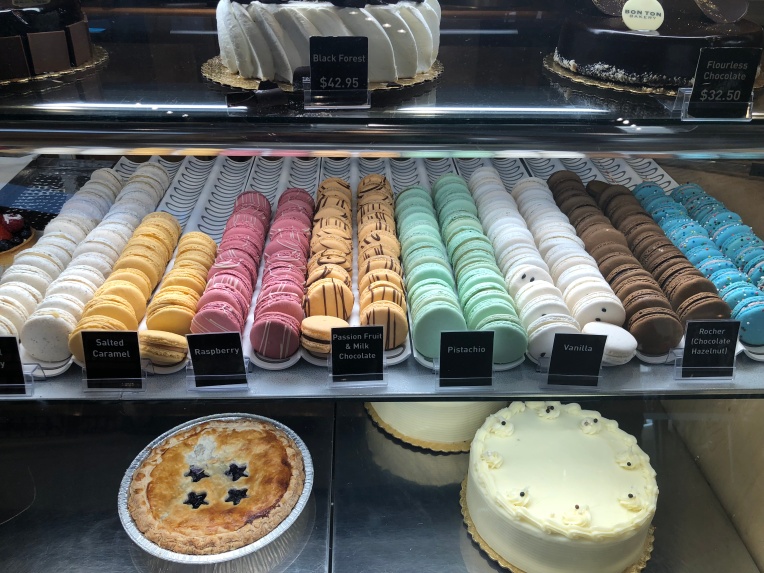 We chose classic vanilla because we figured that would be the most common flavour. Vanilla is my favourite, it is complex yet fairly neutral.

This bakery once was listed at the top 23 bakeries to visit in the world and for good reason. But since that day the Buzz feed article was released, the line-ups have been out the door.

We arrived at 10:15 am. 15 minutes after opening. By the time we left, the line was around the shop, out the door and down the street. 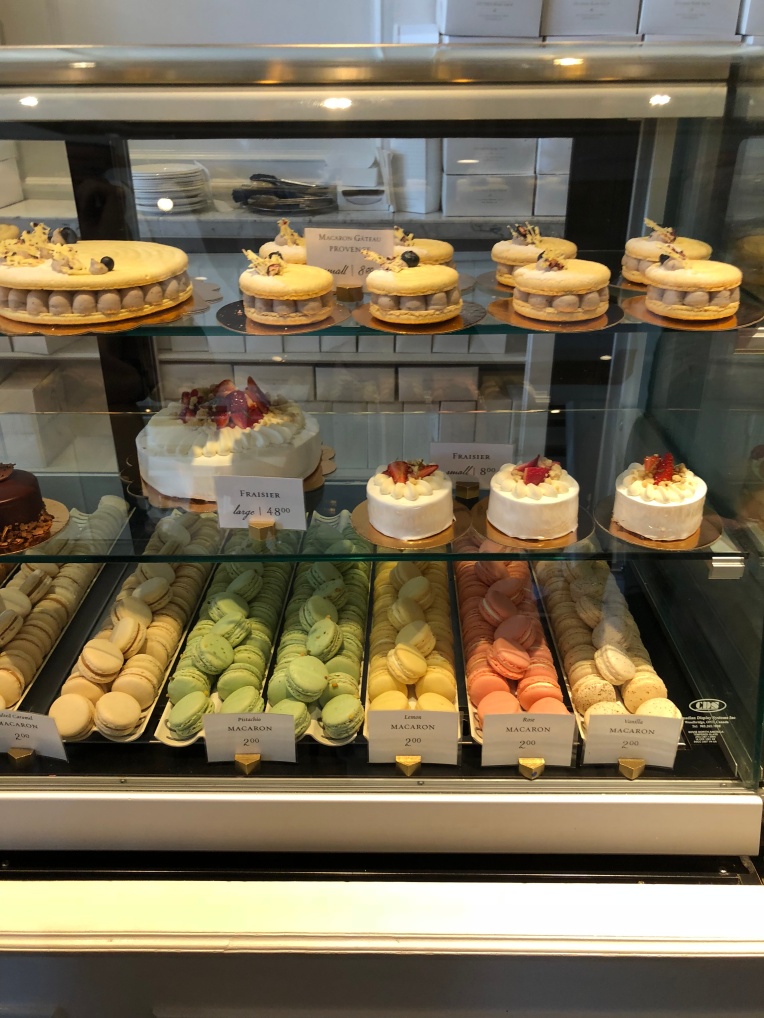 The shop was tiny but smelled like a bakery and the chef came out to greet us. She was friendly and patient because we could not decide on a flavour. Why you ask? She didn’t have the classic vanilla. So we decided on a classic French flavour and chose honey lavender. We purchased two. 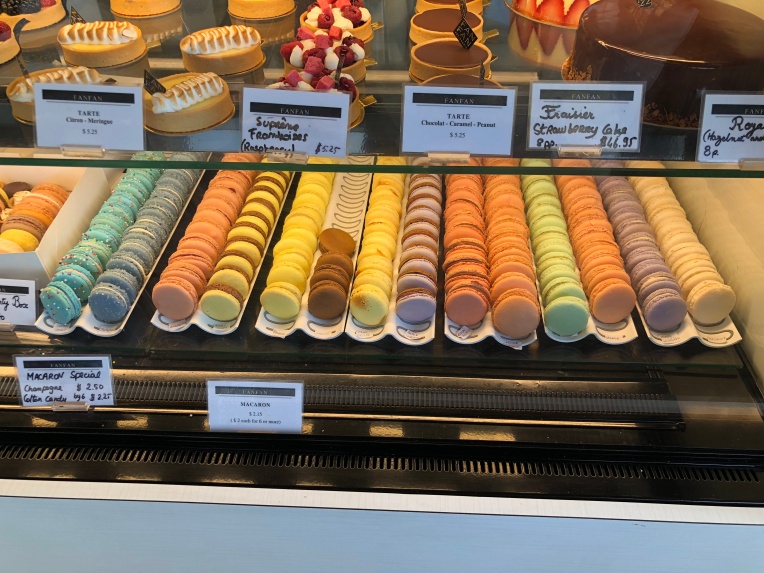 We took our purchases home and set up a taste testing booth.

This package was from Bon Ton, a cute little white paper bag.

This package was from Dutchess Bake Shop, a non-descript white bag. Other items were packaged in a Dutchess box with a gold and white Dutchess label.

A lovely branded clear bag with a sticker from Fan Fan Pâtisserie.

From left to right: Bon Ton, Dutchess, and Fan Fan.

The Bon Ton had vanilla beans on the macaron. First, we smelled the macaron, it was a non-descript cracker type smell. We both bit into it and it was a crunchy texture. The flavour was mild, could barely tell it was vanilla.

We knew the Fan Fan was going to be a different flavour, so we were judging it based on smell and texture. It also had a non-descript smell but the texture was soft and light. It was not as creamy as the Dutchess but it was fantastic. The flavour was bolder than expected for lavender, but it was lovely.

Our favourite was Dutchess. My daughter claims it is not as good as Ladurée but it is a close second. The price is better too. $2 vs 3 euros but Laurée has nicer packaging and they sell them at the airport in France if you are just catching a connection or didn’t make it to central Paris. 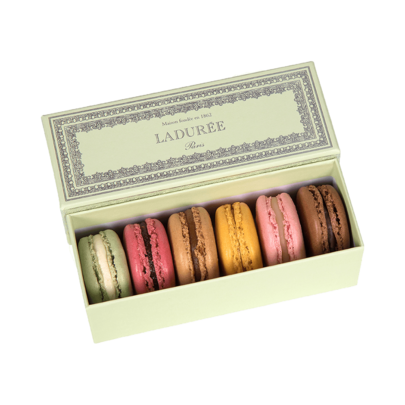 The gal at the Strathcona Farmers market needs to get honourable mention. Her’s are flavourful but not as soft. We didn’t visit her today but have in the past. Her macarons are $1 ea. Easily the best price.

Our favourite was the Dutchess but I don’t always feel like driving that far nor do I think waiting in line is super fun, but I would make the effort to visit Fan Fan Pâtisserie. It is closer, small and located in Old Strathcona. But I would consider taking a class at Dutchess to learn how to make them and they sell the mix for the shells for $20 at their provisions shop. I suspect it is 10% ingredients and 90% technique to make the perfect macaron.

So tell me, where is your favourite macaron?

One thought on “The Macaron Challenge”