I don’t know about you, but I have had a tough week. I have faced disappointment, heartbreak, painful memories and helplessness. In an effort to keep from raging I decided to visit a park that I had not been for 30 years. Truthfully it was a place where a lot of my demons live and I thought I should lay them to rest one and for all.

I packed up my pup and headed straight north from my home to Strathcona Science Park. Its not an Edmonton River Valley park, but I am counting it as one. It is within driving distance of the city , it is situated directly east of Rundle Park an the east bank of the North Saskatchewan River. But this park is a Provincial Park.

The irony of my laying my demons to rest is this place is already dead. It has been all but abandoned by the Province in an effort to push the economy forwarded. So 28 years it has been a derelict site with the exception of the mowed grassy paths. An odd juxtaposition with the cracked and damaged paved paths. I was not in the head space to really research what happened or what is was or event what its future was supposed to look like, but the Globe and Mail did and you can read about it here.

I was here to find a way to live in the moment, forget about my future and let the past go. I am getting quicker at it than I used to, focusing on the now has become a tool I use to live a stress free existence. I am not pro level but I would say I have moderate success with the now.

Cap and I pulled into the park at 3:00 pm and it felt like the sun was beginning to set. Well, it felt that way because it IS beginning to set now at the time. We are one month away from the shortest day of the year and darkness is beginning to seep into all the nooks and crannies. The sign has not changed since I worked here at the ski hill in 1985. 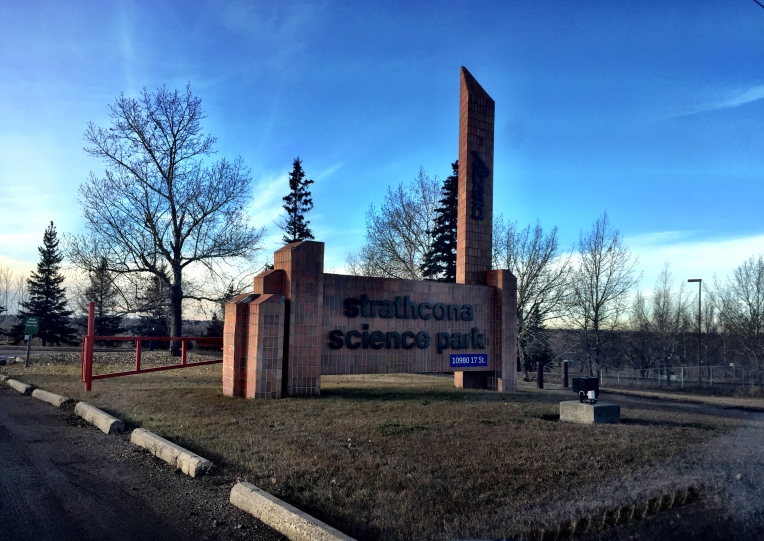 Cap and I drove to the left of the sign and found parking near the abandoned pavilion. He was super excited to be somewhere with new smells and deep grass to explore.

There was a real bald prairie feel to this park. Granted, the trees have sprouted up since I was last here, I remember this place feeling hot and oppressive under the blazing sun when I would ride my bike from Sherwood Park, this place would be part of my journey to connect with the river valley trail system where I would cycle all day on a Sunday.

The Downtown core seemed far off and remote. I know from running experience that I am about 18-20km away from City Hall. I’ve run it and find the valley the very best part of being an Edmontonian. 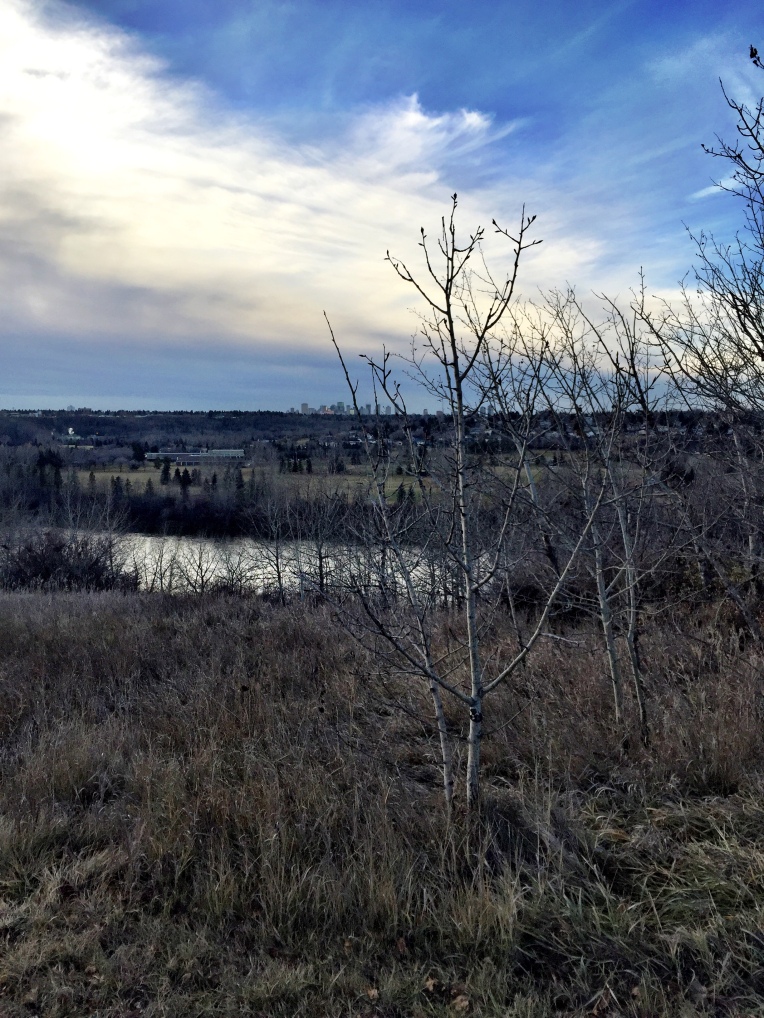 As we came closer to the edge of the ridge, the North Saskatchewan River came into view.

We turned south and headed towards what appeared to be paved paths the circled the pavilion.

This is one of the coal mines sites from the clover bar coal seam. Signage let me know I might be able to find remnant from the mines, in the 80’s there were 5 archaeological digs happening here. I have no idea what they found. 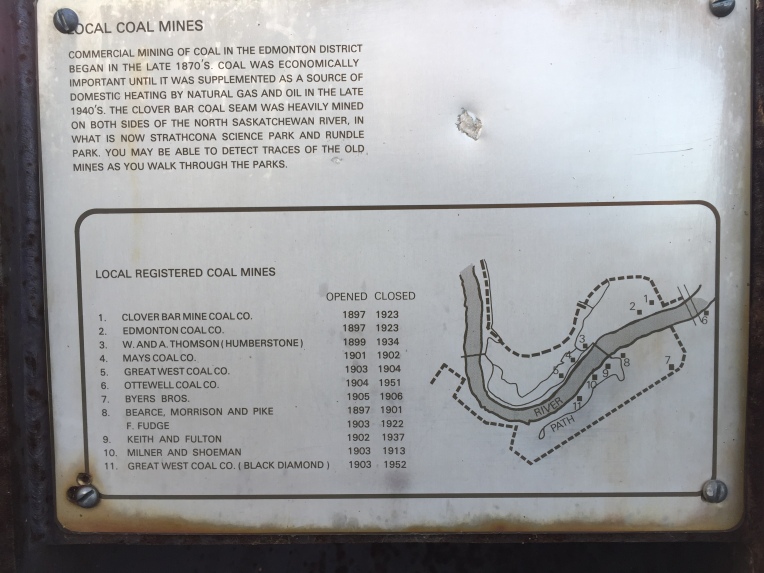 I was standing at #10 Milner and Shoeman. My journey took me all the way to the end of the path at the loop along the river bend. 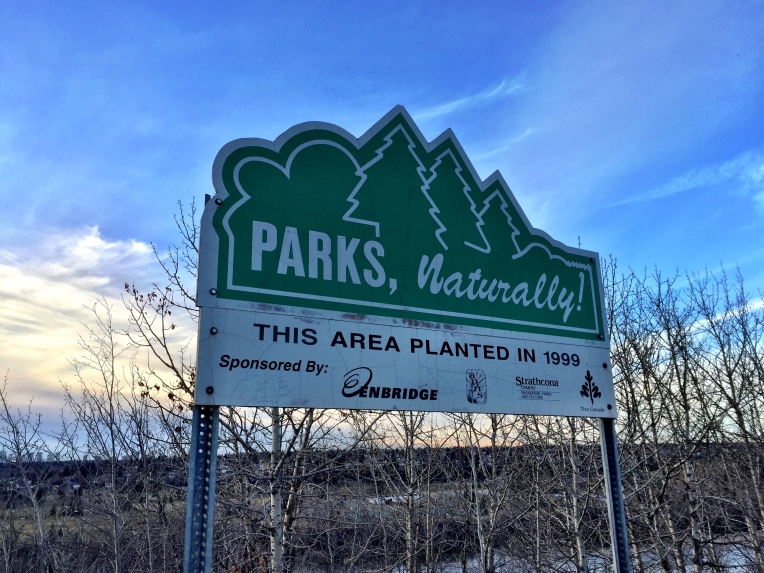 I remember this being grassy prairie in 1986, it looks like it was left to naturalize over time with the aid of planting in 1999.

This guy became tired of mousing and does what he does best – survey his land. All of it is his in case you did not know. Across the river is Rundle Park and to the left is Goldbar and Goldstick parks where my journey began earlier this spring. I still have 4 parks left to visit before my goal is complete. I will save those and pick them on sunny days.

The walk back to the car really showcases the prairies. Alberta is as diverse in its landscape as it is beautiful.

It looks peaceful but the sounds from the surrounding industrial was loud and obnoxious. It was strategic on my part to not to photograph the refineries.

Will I be back? Doubtful. It no longer holds the demons I expected. Clearly I did indeed let those go. As I neared my car, the anger and rage I was feeling towards my week subsided. Nature does that for me. As the song goes, I have that peaceful easy feeling. 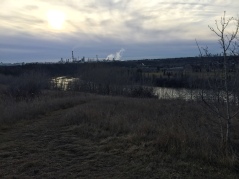 Empty skating ponds, well, nearly empty. Two geese are trying to set up shop. . . . . #yeg #yegparks #edmontontourist #explore #dailyviewalberta #edmonton #covid_19
CAUTION! Playgrounds in Edmonton are closed now. I guess that means it’s covered in caution tape. It makes sense to me, my littles liked to lick everything. Stay healthy friends! . . . . . #yeg #yegparks #yegplaygrounds #covid_19 #edmontontourist #edmonton #edmontonneighbourhoods #stayhome
A year ago my boy and I took a day trip to Abraham Lake to see the bubbles. I thought I’d miss exploring more than I am. When we get out of this, and we all walk out into the sun, where is the first place you are going? I’m going to go to the Rockies and apologize for not being grateful enough. . . .. #abrahamlake #travelalberta #explorecanada #dailyviewalberta #rockymountains #alberta #edmontontourist
I made @sarahjampel ‘s Tahini Billionaire Bars without the sesame seeds because quarantine is hard. The butterscotch is next level #basicallybaking
Making homemade pasta today. Recipe in my stories. . . . . #pasta #cookingathome #isolationcreation #foodie #food
. . . . . . #exploreedmonton #yeg #yegdt #yegrivervalley #edmontontourist #edmontonliving #edmontonneighbourhoods #dailyviewalberta #explorecanada
%d bloggers like this: