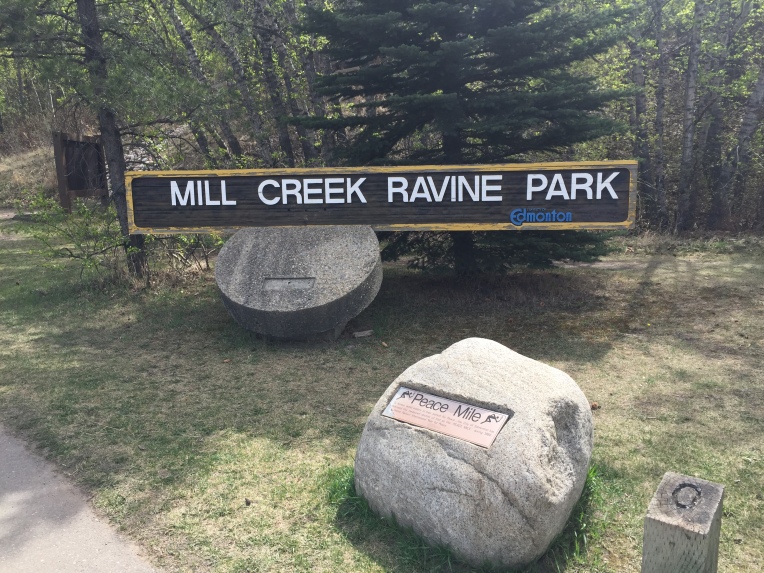 Can someone tell me why Mill Creek Ravine is classified as a River Valley Park? It starts in South Edmonton by Argyll Road and ends about 2km away from the River. It does follow the creek all the way into the valley, but it is not really a Vally park. Not that I am complaining. Mill Creek Ravine is park #4 in my quest to visit all the valley parks. This one is my favourite running spot. I am always on the upper trail beginning my downward decent into the valley because running downhill is the most fun you can have on legs.

The Captain and I began at the 2.5km mark. How do I know the milage? I run this trail a lot. The Mill Creek Pool upper parking lot is 2.5 km away from the trail head. I have run that a gazillion times and have explored the lower trails down below. But I had never been along the creek itself at this point of trail. So Cap and I parked the car in the busy lot and made a right turn towards the creek down the long steep hill. 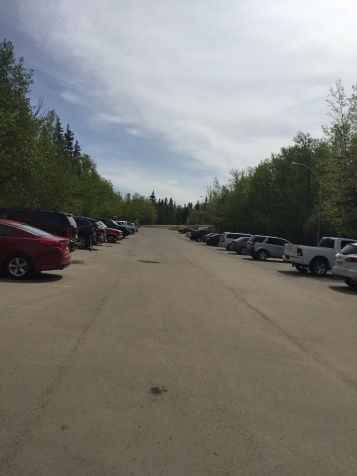 The hill was loose gravel and my sled dog thought running down it might be fun, except it was too steep for me to run so I fell and he kept dragging me down the slope while my feet dug in as brakes. I finally had to yell at him to stop. The cyclists behind me thought this was hilarious. I have a very strong pup. 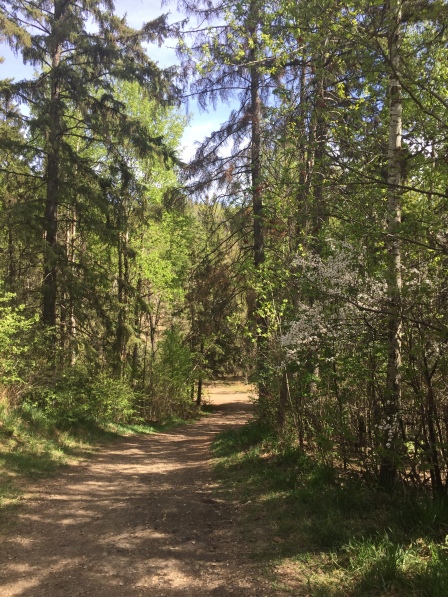 The first thing I noticed about this new trail I was on was the blossoms. It is super early for leaves and flowers but I will take it! I love summer and today had that “summer in the city’ feel to it. 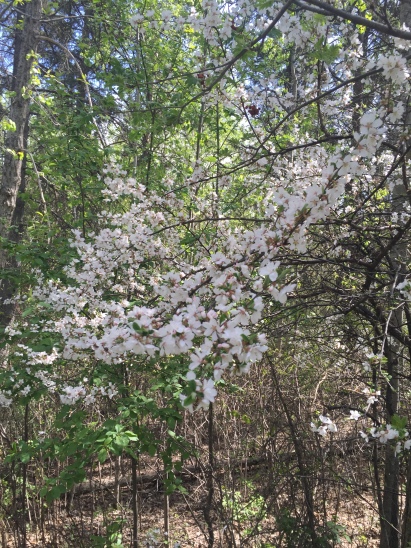 When we made it down the hill, I took the time to brush the gravel out of my hands and emptied my shoes while Cap explored the first bridge and the creek. 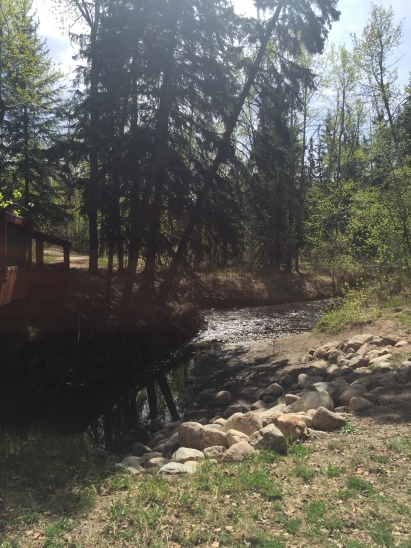 I was surprised by the amount of people down here. The upper trail is always busy in the mornings with runners getting their long run in for the week. But this was 1:00 PM, the runners have finished for the day and the cyclists were out. Apparently this is where they come. So many trails that meander all over the place down here, I made sure to stay close to the creek. I knew it would come out at the river so I didn’t fear getting lost.

I crossed 7 bridges that spanned the creek. Far mare than I was expecting. 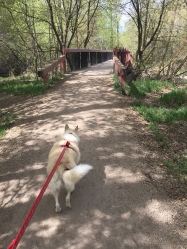 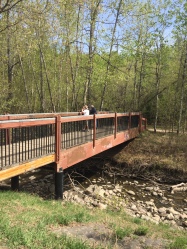 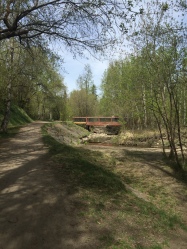 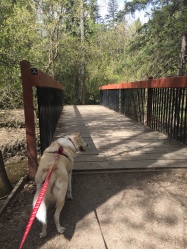 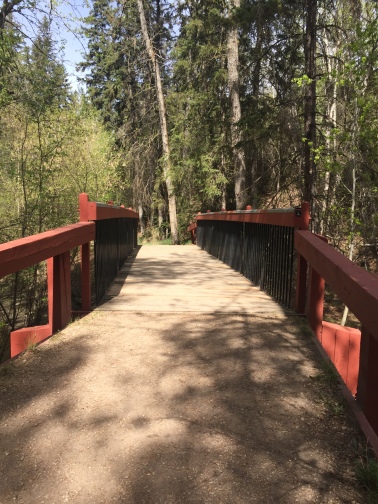 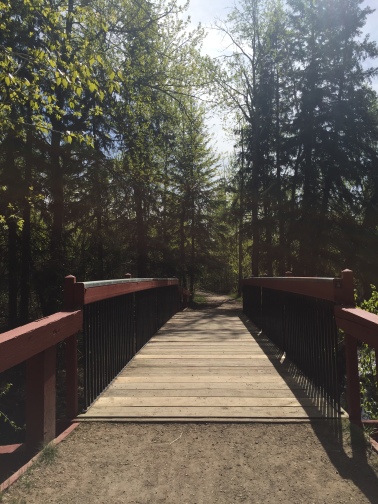 As Cap and I wandered around, we found some seniors playing Pooh Sticks. A game my kids like to play when they were little. It is a game you play by tossing a stick downstream and rushing to the other side of the bridge to see whose stick won the race. Cap and I stopped to cheer them on a bit. We continued on and found the River Valley Clean up Volunteers in full force picking up refuse and the trash to keep our parks lovely. I got into this habit long ago from my dad. Out walking and I pick up trash I see and place it in the bin. If everyone did this, a big weekend wouldn’t be needed every year. So THANK YOU Volunteers! I appreciate the work you do!

A little further along the creek and we found two boys building a fantastic fort. This is something I loved doing as a kid. When I lived in Hay River we had a forest behind us like this one and I spent hours working on my home away from home. These two boys built an impressive lean-to and had benches and a cooking area. There is nothing I love more than to see imagination at work. 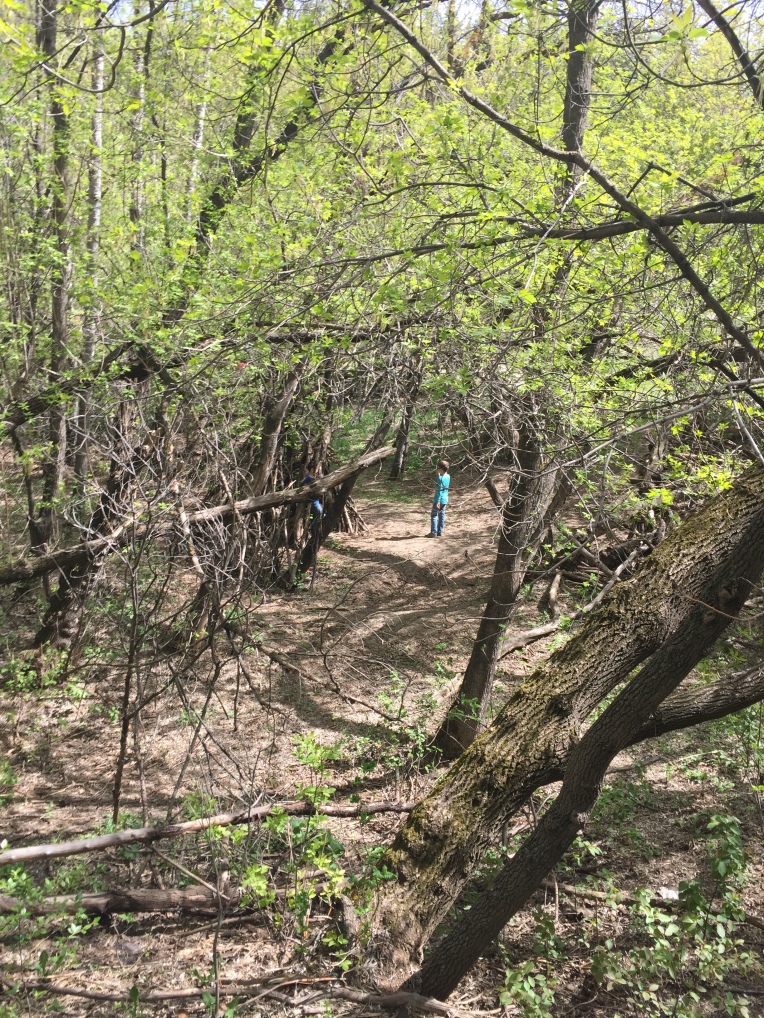 We kept pushing onward and discovered a picnic area. It would be a bit of a trip to pack fire wood in, but it can be done! 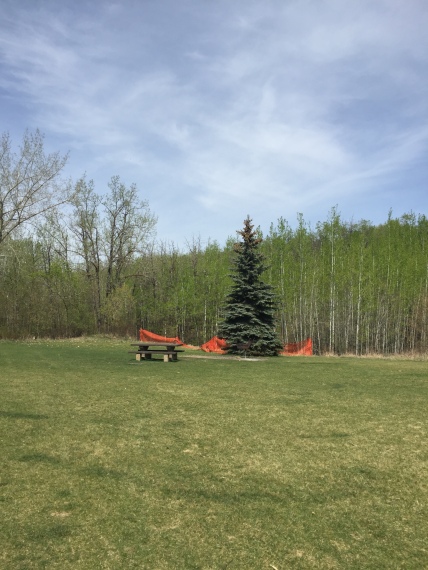 As we wandered along the creek, we heard lots of birds and saw dozens of dogs but the rest of the wildlife was scarce. Even water in the creek was low. It has been a dry winter and even dryer spring so I am hoping for some solid rain to happen for a while. 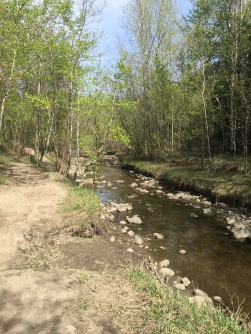 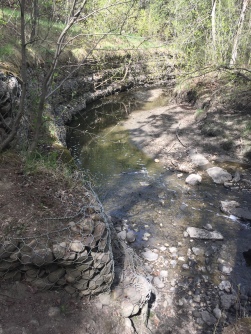 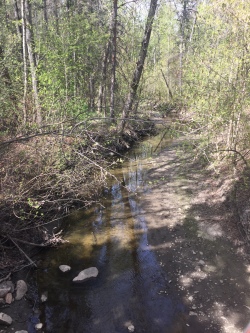 As we entered deeper into the forest the noise of the city became so distant we could no longer hear it. As always it amazes me that I can be in Downtown Edmonton and feel like I am in the middle of nowhere. 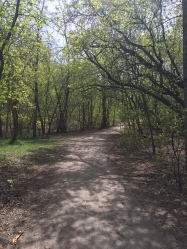 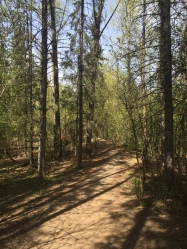 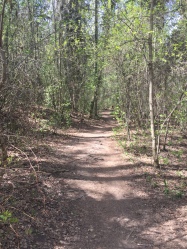 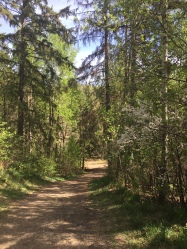 Before we new it, I could see the buildings peeking over the trees in an effort to remind me where I was. 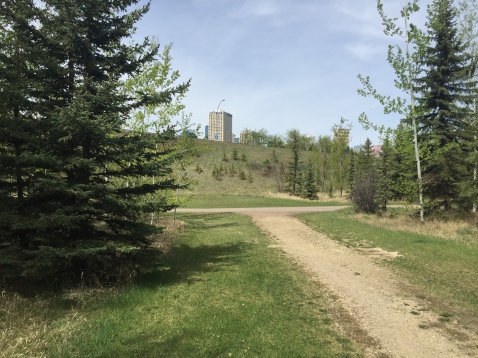 I had expected this walk to be about 2km to Connor’s Hill, the road that leads to the downtown core. But because of the meandering creek, we ended up walking 6km much farther than my dog prefers. We needed to stop in the shade so he could snack on some greens and cool his belly on the damp grass. I finally convinced he we needed to walk further because the apple tree was in bloom and I wanted a a photo of the sign, proof we were here. 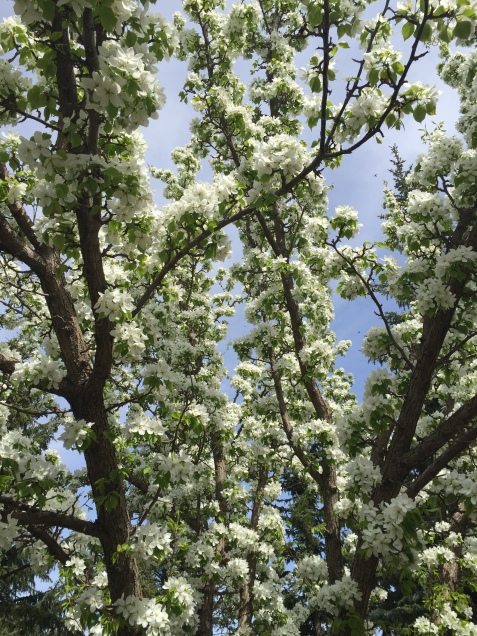 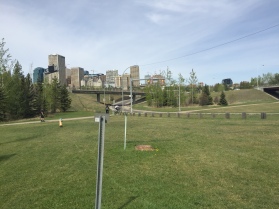 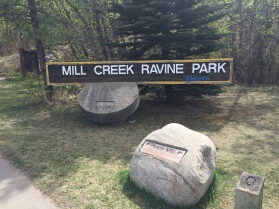 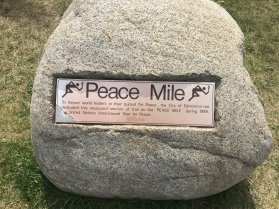 To cheer Cap up, we climb the paved trail back to the parking lot. This was a 2.5 km trek, a much shorter distance than the way we arrived at the bottom. 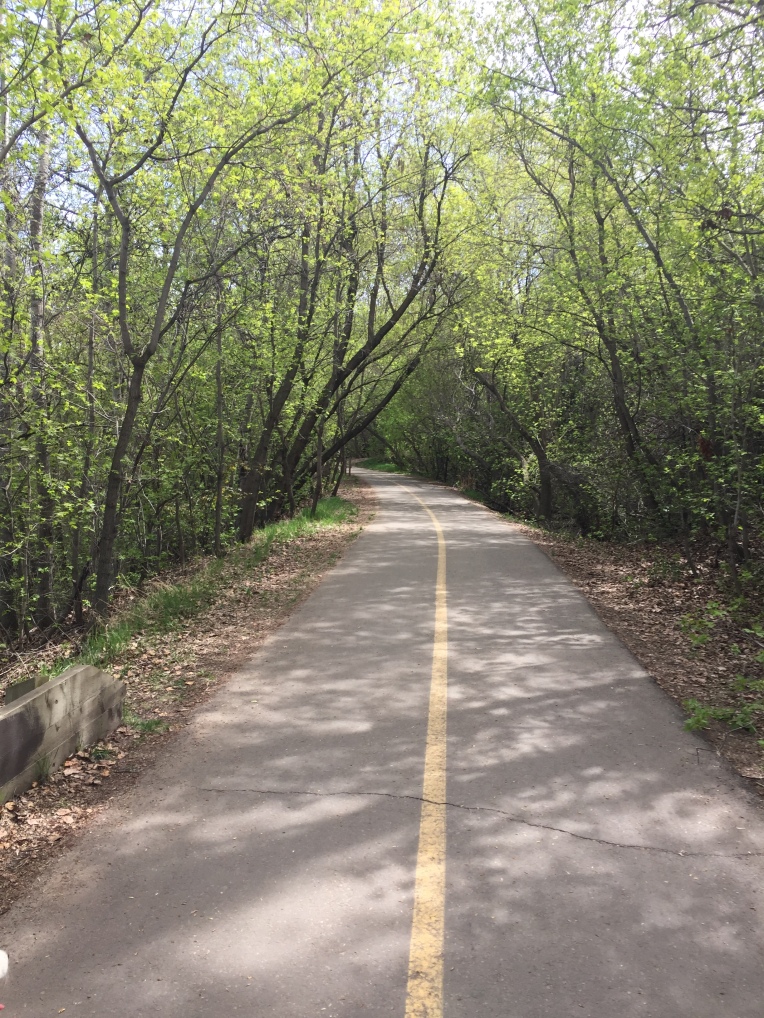 This was my 4th park. All 4 times I have experienced something that I had not seen before. It astounds me that Edmonton still holds secrets from me. Damn I love this city!

Next up Nellie McClung Park over by the Old Timers Cabin.