While stuck in the snowstorm traffic jam at rush hour with my son, we started chatting about things he would be telling his kids. “When I was a kid, we paid for stuff with PAPER printed money”, “We listened to DIGITAL MUSIC”.

Then we laughed and he was telling me about seeing a Beatles album for sale in California when he was there on a band trip. He said it was expensive, $40!!!! I laughed and told him my $5 allowance would pay for a movie – $1.25 for Star Wars, lunch at A&W, and a record.

He asked if the record was vinyl.

umm…yes then I laughed. Records were vinyl and the needle was sharp. But sometimes you needed to put a penny on the arm to weigh it down to get the sound to work. He laughed and asked how I would take music with me in the car if this was before cassettes.

I thought about the time I received THIS for Christmas: 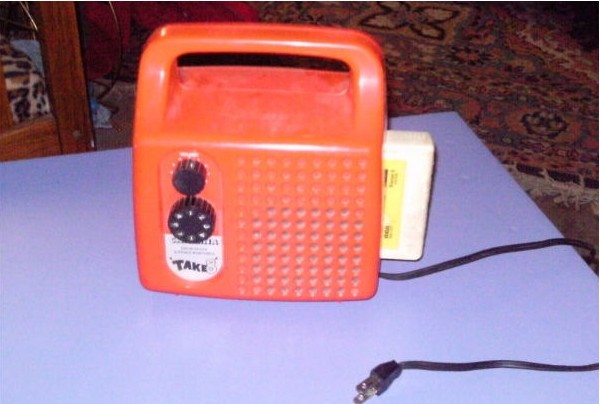 Orange and portable – ish. It took a billion D batteries or you could use the cord. I also received a selection of 8 track tapes for my enjoyment. I had The Carpenters, ABBA, and Shaun Cassidy – that’s right Da Doo Run Run.

I would crank my music and sing in front my mirror with my hair brush as the microphone. Over and over I would play my music until I would hear “THUMP THUMP THUMP” on the floor above me. My dad would yell “Turn it DOWN please” (we are Canadian – it never hurts to be polite) so I would turn it down. Then it didn’t look like I was singing so I would do something else while listening to it. Dad said he never minded the loud music it was the repetitious nature of my musical choices.

I still listen to music over and over until I know all the lyrics. Which is likely why I am AWESOME at music trivia or name that tune type games. Thinking back, 8 tracks sucked and I am glad Sony never made a 8track walkman.

The Top 8 reasons 8 tracks were stupid

6 thoughts on “Throw Back Thursday: The 8 Track”