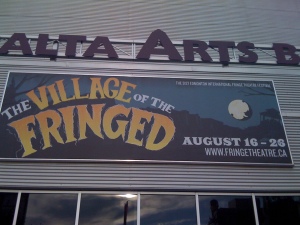 I attended the Village of the Fringed opening ceremonies yesterday for my birthday. This is another new thing I have tried. While I am a long time fringer, I usually wait until the reviews start popping up to pick and choose what I want to see.

I think a little back story is necessary. Fringe is a noun or a verb. Basically it is a collection of venues that host a play/improve/theatrical experience that you go and watch. The old days, one would fringe by standing in line for a mystery venue and taking a chance on a show. You bought your tickets at the door. Now you buy your tickets at the box office ( a tent in front of the Strathcona’s Farmer’s Market) or purchase them on-line. They still sell tickets at the door, but don’t hold as many. Edmonton hosts Canada’s largest Fringe Festival. This year is the 31st Fringe here in River City. I started going in 1988 when I was making cash and could pay the open shows or the closed venues.

My first show I saw in 1988 was with my sister. I took her to see The Arrogant Worms. We are still fans and have passed their comic genius down to our children. Everyone has the Worm’s music on the rotation in their iPods. My favorite is Canada is Really Big or Let’s Go Bowling. I knew The Pirates on the River Saskatchewan before Captain Tractor did it and actually, The Worms wrote it. I haven’t seen the Arrogant Worms in YEARS they have to be old like me and perhaps the Fringe Tour is just exhausting. Fringe performers are basically homeless and live out of their suitcase. It would be a tough gig year after year. Yet I see the same performers came back for a few years in a row!

This time we watched the Fringe Parade of Stars. I have no idea if that is what it is called but you lineup along the alley/gravel road behind the main venues and watch the performers walk in costume handing out handbills and sometimes cookies, all in an effort to entice you to see their show.I met a Hippo that spoke with a French Accent, luckily I also can speak with a French accent so there was no language barrier. I met a very excited dude from Orlando Florida who was excited that he saw snow twice while flying over the mountains from Vancouver. He was jumping and so excited to be here. I met a guy from Brooklyn and another who just said New York, a fellow with a Russian accent from Edmonton and a drag queen who kept saying it felt like a protest not a parade. I met sister wives for a polygamist show and weird creepy dudes from a show called Suicide a Love Story.

I was offered free tickets to see the shows by some performers so I could review and promote their shows. Sadly I had pre-purchased tickets for the family so I couldn’t take up the actors on these freebies! I needed to carefully select the show my family was seeing. When you Fringe, you never know what you might get, from blood and guts to nudity and actually sex on stage. The Edmonton Fringe  does not jury or censor artists’ work in any way and selects performances using an unbiased lottery system. Therefore there is risk involved. I would ask the performers if it was suitable for my kids, The Syphilus show guy was honest and said there was no nudity or swearing but the content was obvious. The Beef lady was also honest and said it may not be appropriate but I was welcome to see it without them. That is the plan. Go Fringing without children…maybe. But then I got them hooked on Improv. 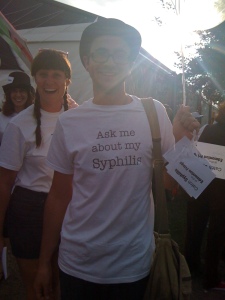 After the Parade of Stars, complete with a Flag barer (it was just like the Olympics!), we walked from the Fringe site to a BYOV ( Bring your own venue) site down on 109 street. BYOV means the show finds their own venue, arranges a price (usually free) and sells tickets to their show. Often there isn’t an extra site charge and the Fringe has student pricing! (FYI I love being a student for this reason!) We were seeing #yegprov, a twitter improv experience.

While waiting outside for the venue to open, I recognized a fellow – or thought I did. I asked him if we met in the park over the summer. He said wait…. pulled out his phone and gave the details of our meeting. It made my family crazy because I know everyone. Being opening night, the audience was sparse, people like to wait because we all have a limited budget for shows. $13 is reasonable but it starts to add up quickly if you see everything!

We sat near the front because improv is all about engaging the audience. We provide the non-geographical location, a famous monument, the name of your first crush and so forth. The spin on this improv was twitter. There is an at home game you all can participate in this week just follow #yegprov. The audience was asked to tweet their suggestions alternating with shout-outs. As with all improv, the stories can go south pretty quickly but for the most part this show was seriously fun! Genetic Offspring is a improv vet and participates in NAIL (Northern Alberta Improv League) He was please to have learned two new games to bring back to his improv team. We laughed hard and sometimes groaned, but all agreed this was tremendous fun. We plan on checking Rapid Fire Theatre group for their take on improv and perhaps see if we can find another improv group or two. Better yet, go back and play with the #yegprov group again, or at the very least, playing the home game.

Day 2/15 of peace and tranquillity.
Day 1/15 of peace and tranquillity. A perfect morning in the creek. An old guy stopped to chat about how happy my dog is then whipped out his phone to show me how happy his dog is. People are amazing.
Took a drive a accidentally found NW Division. The half mast flags feel a little hypocritical. Beautiful building.
I love painted signs. I think they give a neighbourhood massive character.
I love random art that people can enjoy
Throwback to spring on Sunday.
I’m always surprised at how the skyline has changed.
I know where everyone went on Sunday.
You are here