Have you ever traveled outside your country and met someone who asks you where you are from? Usually it is some guy who says, “My Neighbor’s Friend’s Cousin’s Sister’s Nephew lives in Alaska, do you happen to know them?” I always ask their name then politely answer, “No, I don’t think we’ve met. I don’t get out much!” In case you didn’t know, Canada is a large country. Oh you knew that? Well then, Canada has a smallish population about 32 million. Slightly less than the population of California, which sits at 36 million. The chances of me traveling to Belgium and meeting a family member of someone I know is slim to none. Or is it?

The last time we chatted about my travels to Europe was here, before that it was here.  This is the story about the time I went to Bruges.

The entire cast of the Muppet Show was slightly rested and full of chocolate by the time we reached Bruges. This was a place that my Mom dreamed of going. I am THRILLED she thought it was worthy of sharing it with my clan. We arrived after lunch and drove the streets looking for somewhere to park the caravan. Keep in mind, the streets were built at a time where donkey’s ruled the earth by pulling carts. The Urban planners in those days did not share the foresight that today’s planners have. They may have envisioned Oxen pulling carts, but never the Jules Vern version of a caravan.

Dad had the good fortune of negotiating the narrow streets with the cast of Muppets in the back. He found a spot and carefully just stopped where he felt like it and deserted us. There was a knock on the door, and Honey answered it in the most polite possible way for a Canadian. The Police Officer said in a less than Canadian manner, “Can’t park here! MOVE!” Then his eyes caught the glitter of a Canadian pin on my Honey’s lapel. The Officer’s demeanor changed and he smiled, “Canadian?”

“YES!”, we all cheered the way only Muppets do. If you have ever met my Honey, the you know he has the gift of gab and can make friends with ANYONE. The two struck up a conversation and chatted about the trip, flight, cost of living, plight of the Tiger, parking, and then the question came… Where are you from because I have family in Sherwood Park. You know the sound a needle makes on a vinyl record as it stops? That was the sound in the caravan. The Muppets stopped the boomerang fish from flying, muzzled the chickens, and even Waldorf and Stadler eased up on the wisecracks.

Sherwood Park is a tiny little place east of Edmonton. The entire Muppet Cast, except Honey, was FROM Sherwood Park! What are the chances? SHERWOOD PARK! Suddenly, he was family, we became home sick and no…we didn’t know the brother, but it didn’t matter. We now had a friend and allies who would show us the way to parking! His directions were exemplary. We found caravan parking. We were now able to go out and explore Bruges, sample the best Belgium Waffles dripping in chocolate, eat frits and mayo, indulge in rich creamy coffee and enjoy the wonderful city of Bruges. The swans were beautiful, the Architecture was stunning, the cruise on the canal was enchanting. All because we knew a guy who had a brother that was the neighbor of the sister of someone we didn’t know.

If you ever get to Bruges, ask if you could speak to the Police Officer whose brother is a neighbor of the sister of someone the Edmonton Tourist doesn’t know, and say Hi! 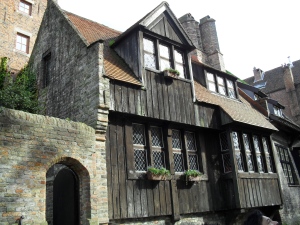 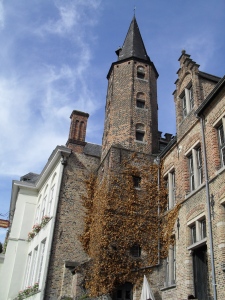 113 thoughts on “Do You Know My Neighbor’s Friend’s Cousin’s Sister’s Nephew?”

Fall is just too pretty for words
The sea wall
I love public art. It elevates cities even if you think it’s terrible. Art’s purpose is to make you feel. If you hate it- that’s still a feeling or emotion.
The infamous dude at Dude Chilling Park
I love lighthouses. In another life I think I must have lived in one.
One of my favourite places to be in the city.
Happy #nationaldogday to this doggo. Captain is my heart ♥️
I love these guys